I sent off my Vampire Swap today.  Now I can't show what I sent until after they've received the package, but I can show you what I sent off: 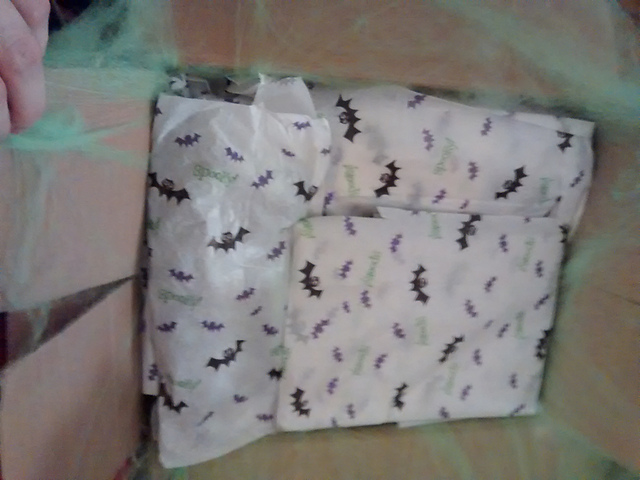 I found this awesome bat tissue paper last year at hallmark after Halloween.  It was super cheap and I couldn't resist getting two packages! I used most of it in this swap, but my partner would like it (and since she's crafty, I'm sure she may reuse it as a background for her art or something) and I still have a few sheets left for myself - who knows, I could find some more this year!

I'd like to make a few more crafty Halloween items - I made a ghost on the Rainbow Loom the other night, and I'm considering buying Patch.  There is one hitch, however, and that is I have patch on my Vampire Swap wishlist, and could very well be receiving the pattern in that (though unlikely).  So I must wait until I've received my swap, which may leave me out of being able to knit one for the Halloween knit along, but I WILL get the pattern - eventually.

I'd also like to make a Frankenstein on the rainbow loom, however I don't have enough bands right now, and with the man-beast's birthday 6 short days away, I feel it's an unwise investment at this point.  Although, that means in six short days you will be able to see what I made him!

In other, knitting news... I made a booboo on my Hitofude (I misread the pattern when I was tired  and knit on anyway, then found that I didn't have enough stitches... by nearly half), and since I knit without lifelines... you can assume what happened.  I tried to rip back a few rows and ended up ripping back to pretty much where I last posted.  Out of frustration, I've put the little will-o-wisp in a time out, and I haven't been feeling colourwork of late.

I started a new project, after going to Micheal's and finding a yarn I could use my discount on, however I finished the first of the slippers and didn't have enough yarn to do the second slipper... or the buttons to finish the first.  So sadly, the slipper is in two pieces, and my be like that for a while! ( They're Drops Red Riding Slippers, if you're interested).

I'm now looking for a new project to work on, but I'm not sure what I want to knit.  Perhaps a browse through my yarn shelf will inspire a new pattern... or perhaps I'll finish a long hibernated project - we shall see!
Posted by Faela Star at 7:27 PM