I went on a bit of a cleaning and reorganizing spree.  I cleared out my knitting corner which had yarn in bags and half finished projects lying around, and I moved some furniture.

After sorting through my skeins, I found a forgotten project - a mystery knit-along hat to which I had all the clues, but only had knit the first 3.  A few other projects that I decided to frog and the single socks I've yet to knit the mates for (Damn SSS!).

I didn't get much knitting done today, but I at least have a bit of a cleaner environment to work in.
I suspect tomorrow I'll do a bit more cleaning and reorganizing as well.  I still have far too many Christmas gifts to knit, and there aren't many in the Christmas box.  This is going to be a rush knit year! 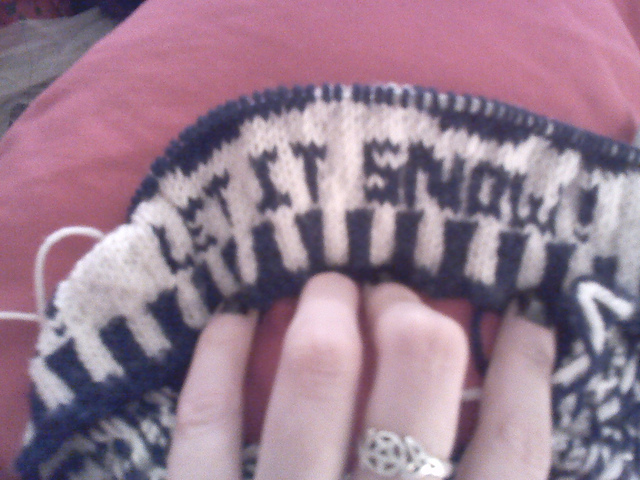 This is the forgotten hat mentioned above.  I knit 2 rounds before remembering I didn't have a before picture!  I hope to finish this one before bed, and send it straight into the Christmas box.  This hat is now available for purchase on Ravelry (it was a July MKAL).  Let It Snow Hat - for only $3.00! 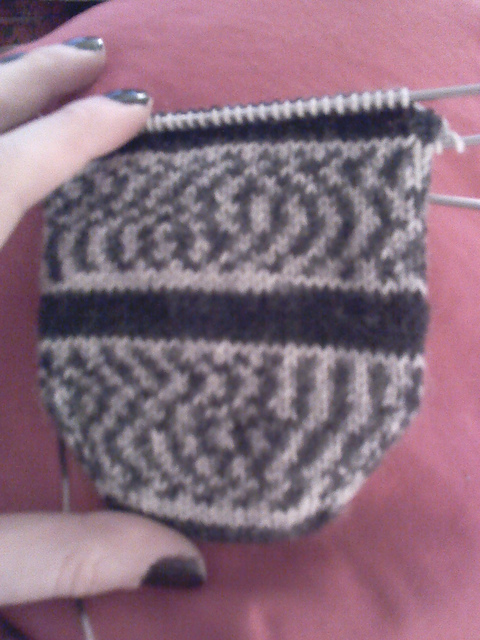 This is the progress I've made on the sock.  Like I said, I haven't done much knitting today - in fact it's a bit pathetic, but I'll be able to settle in tomorrow and knit some more in the evening.  It currently measures 4", another 2.5" before the gusset for the heel.

Sweater Envy!
I've forever envious of knitters who seem to make numerous sweaters throughout the year - I've only ever finished one full adult sweater, but always yearn for my own cushy handknit luxury ones.  With that in mind, I  recently bought another 2 skeins of Tosh Sock to finish my Tempest Cardigan.  I made a few modifications - mainly lengthened the sleeves (which is why I ran out of yarn!).  Anyway, I cast on in Flash Dance and Lepidoptra back in June - this project seems to be put on hold a lot, then worked on for a good chunk, then put on hold again (for details on how my progress has been, see here.)  Sadly, I don't have a picture of any of the pieces - I'll upload some when blocking the pieces.

A word on beading!
We're doing a Secret Santa at work, and we're to make a handmade gift (maximum of $10).
Originally, I thought of knitting something, however it would all depend on who I drew from the "Santa Hat" (aka a ziplock with our names, lol).  After I pulled my name, I knew the perfect gift.  It wouldn't be knit, but beaded.  I went to work straight away - bought the beads, printed off my pattern, and completed the focal the next two nights after work.  After finishing, I decided maybe I could alter the project by adding to it.  This didn't work out, so I decided to make a secondary piece the first would attach to.  I'm roughly halfway done with the second piece, though it's be hibernating for a while now.  I have to have it finished by our Christmas Party on the 16th, so plenty of time.  I could finish it in half an hour max if I'm in the mood, maybe I'll bring it to Bead Night on Wednesday if I go.  I won't be able to share pictures until then, but let me tell you, I think I may need to make one for myself!

In other beading news, I have the geometric bead work book, and I love making the 3D peyote stars.
I also played around with different sizes, and made my smallest yet - the size of a quarter.  The one below was made in size 11 delicas, however I could probably get one even smaller by using size 15s.  Sadly, I don't have many size 15s available in a wide range of colour - I may have to shop around online.

I've been asked to make another star for a Christmas gift.  The star will be in lovely colours and perhaps I'll try out a new design on it.  It shouldn't take more than an hour, depending on how I decide to design it, but I'll post pictures along with some others I've made once I decide to work on it!  I believe this one needs to be done before the 20th, so I'll likely have a bead night soon and work on a few other gifts as well - I have a few Swarovski gifts to make as well!

For now, however, it's time to curl up with some tea and knitting and watch Sleepy Hollow on Netflix!
Posted by Faela Star at 1:14 AM