As soon as I was curled up watching Sleepy Hollow last night, the last thing I wanted to do was knit from a chart.  I was offered a pleasant alternative: 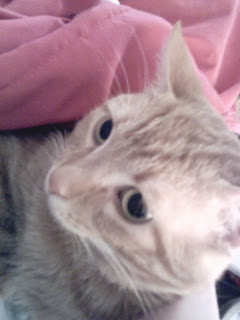 Cuddles with my little ginger.  Phoenix and I cuddled up for the entire movie, he was content just to be pet.
It was just as well as I started to feel a little under the weather. After the movie,  I went through my stash in hopes of finding an appropriate yarn for the advent calender scarf.  Originally, I wanted to use my Skinny Bugga - I have a one of a kins skein - but didn't want to risk that even doing the 49 stitch version I may not have enough to finish.  I finally decided on using Mary Maxim Mohair Glitter in Sea Spray.

I originally bought it to make one of The Dark House Collection mohair projects, but after my petty attempt of a previous mohair sweater that had to be seamed, I decided to hold off - which freed up the skeins I had.  I'll be able to get more of the glitter yarn anyway - and I have more in other colourways and brands.

So after pulling it out of my TTC Knit-along stash, I looked up if any modifications were needed for the 49 stitch version and cast on. 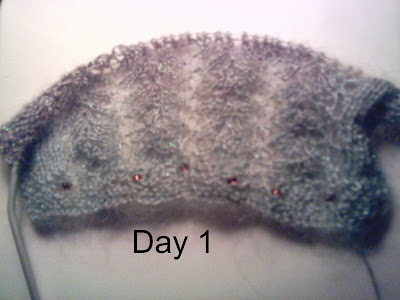 Day 1 didn't really require any modifications, since it's simply less repeats.
I used Copperlined Amethyst size 6/0 Czech beads, they seem to compliment each colour in the skien - and they were already in my bead stash.

I continued with day 2 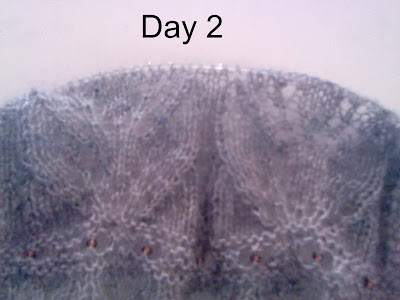 There were numerous modifications noted, some involving increasing, others decreasing - I went for the simplest approach.  Instead of the purl 2 in the pattern, I simply purled 3 in each section.
The third clue was up - Germany is a 6 hour time difference from here, so the next day is published well before night here.  I looked over the pattern, and read the modifications required, but left it at that.  I queued another movie on netflix (Blair Witch Project), piled blankets on my 'couch' and snuggled in with the cats.  After the movie, feeling groggy and strained, I decided to drag myself off to bed.

Today has been a fairly uneventful day. I had some snuggles with Demon: 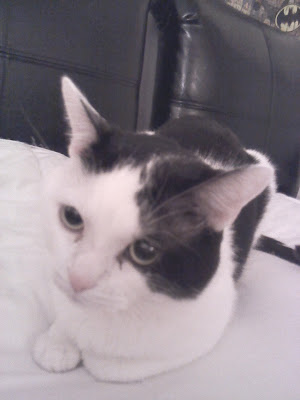 Then knit up clue 3 for the Advent Scarf: 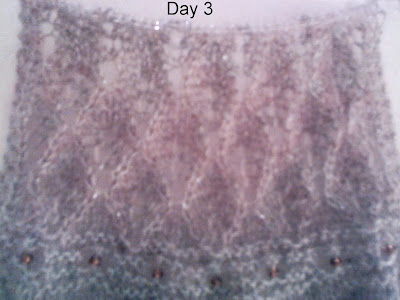 The original pattern (on 103 stitches) was to increase to 104, where as the 49 stitch version would come to 48 stitches, so instead of the increase on the 8th row of the spacer I decreased in the center of that row.  The rest of the clue was knit as written.  I really like the little leaf motif, and the yarn really seems to give it great definition.  None of the days have been blocked yet - I think I'll wait until I've knit the full 24 days before blocking.

Day 4 is already out, but I'm debating if I should knit it when it`s released, or wait until midnight my time.  I'm thinking as long as it's after midnight my time, I may as well knit the day and once I'm finished have my chocolate from my advent wall calender!

Interested in making your own Advent Calender Scarf? Get each day here!  A pattern page is also available on Ravelry.

Since finishing, I've had some time to surf the net with Phoenix and have a nice coffee, 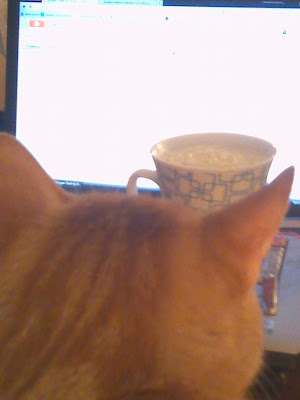 Leafed through some of my knitting magazines and yearned for some yummy yarn to knit some cardigans in (not that I'll end up making any of them, I don't think I have the attention span for them just yet), then managed to have the rare double cuddle - Demon on my lap, and Phoenix beside me.  These cats are civil at best towards each other, so having them so close together is a real treat - usually happens on two occasions, when I'm sick or when I haven't got out of bed yet. 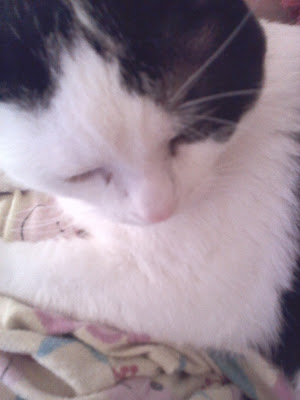 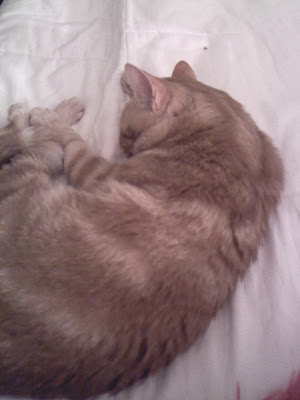 I'm still contemplating my projects for tonight.  I have a simple lace hat I've had on the needles for goddess knows how long - another forgotten project - though I'm itching to finish my Tempest sweater.  I really should be working on Christmas presents, but I really don't feel up to it - of course after waking up, my throat was sore and tender; I think I may have a case of strep throat.