It's been a while since I've been able to update! Since the last time I wrote, I've managed to get a picture of Man beast's sweater... It's not the prettiest, and it's not on a person, but I can finally show it off!
It hasn't been cold enough to wear it, I'll see if I can't get a picture of N himself in it on a nice background of snow - if we ever get any!

I finished Oliver Reindeer for my Grandma - one of my Christmas knits:


And my mum's cabled hug is finished, seamed, blocked and had a quick snap shot.  This is one part of three for her xmas gift, the others have yet to be made, one of which is a custom design to tie everything together. 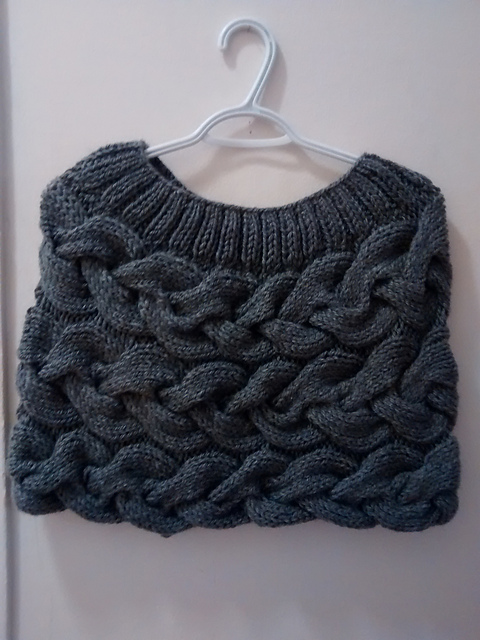 My anniversary is on Sunday, so I knit Mr. N an octopus after he mentioned he wouldn't mind one, and I'm hoping to make him an ornament for our tree before then.  I think he'll be surprised, since we agreed to keep it low key and only plan on going to dinner.

I've knit him Sockhead, which he saw when it was blocking, but since I had mentioned selfish knitting while he was at work that day he assumes it's for me.  What I really like about this pattern is it's pretty versatile, so he can wear it any way he wants - slouchy no brim, slight slouch small brim, large brim no slouch!  I'm also working on Straight Shooter for him for xmas.


I've finished the snowball fight package and sent it off, but I need to wait for it to arrive in Vancouver before I can post about them.  I'm currently working on a Bonnie Mouse, and need to do a few more knits to check off my xmas list, and a few loom items.  It's officially the beginning of December, and I'd like to have everything done by the 20th... I better get a move on!

In non-crafting news, Man-beast and I got a few couch! Demon seems to love it, and while N is at work or out of the city, the little furball steals his section of the couch.

And in case anyone hasn't seen one of the new holiday Tim Hortons cups, they're right up any knitter's alley.  Man-beast brought me one after work on Saturday.