I wanted a reason to be inspired to knit and finish projects.  I frequently have numerous wips on the go, and some end up going into hibernation for months, sometimes years (even though I'll have only been knitting four years this August).  I came up with a game plan: Every month, I can buy myself a pattern off my queue list.  I must knit that pattern before buying the next.  The goal is to have a project finished a month, ideally finishing 12 projects a year.  If I don't finish the project in that month, the next month's pattern will have to wait.  I also plan to design a few of my own patterns, once my shoulder is fully healed.

For June, my first pattern under this new plan, I decided to pick a pattern to make for N.
I chose the High Top Sneaker Slippers pattern, after he agreed to allow me to knit slippers and socks for him - I can't work on socks until my shoulder is completely back to normal, the needles are too small and put too much tension on my shoulder.

Last night, I cast on the first slipper.  It's a surprisingly fast knit, though worked in chunky yarn I find it a little difficult to maneuver the needles easily - my tiny girly hands find the size 10 needles a little bulky! 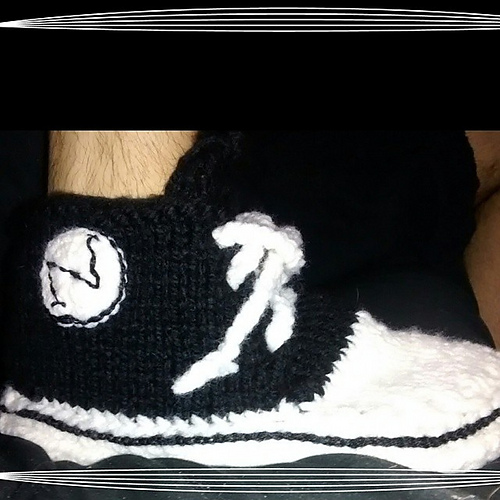 Over all, he was really rather pleased with the end result.  He asked me to make them a little shorter than the pattern calls for, and hopefully it will mean I won't have to buy another ball of Bernat Softee Chunky (the pattern calls for 100g, and that's all I have.) He's asked me to do a second design for the little logo on the other "shoe", hopefully I can pull it off!

I do plan to make myself a pair of these, but I'll be using smaller needles and thinner yarn.  And most likely in pink - cause everyone knows how much I love pink!

This past weekend was World Wide Knit in Public day/weekend.  I hadn't been feeling well over the weekend, but I still decided I had to make and finish a project for the event - even if I wasn't knitting in public.  I give you Petal: 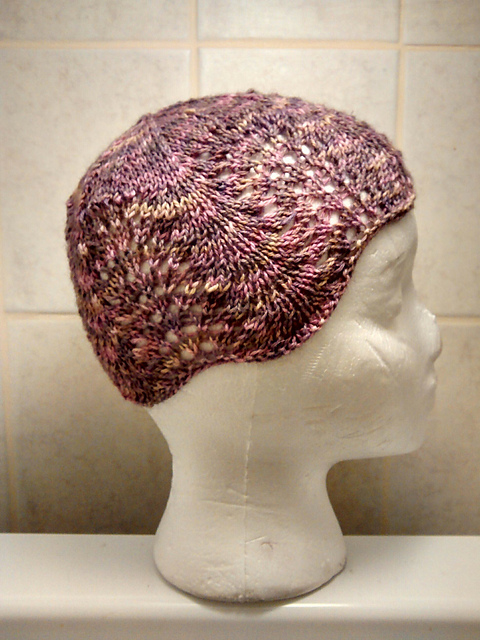 I love how quick this one is to knit! I recommend it for any new knitters that want to try a basic lace pattern - it can be worked flat or in round (I did in the round), so it's pretty versatile when it comes to knitting preferences.

On the 10th I cast on for the Surry Hills knit along. I think the yarn I'm using is a little too bulky for the project, but it's still coming along alright. 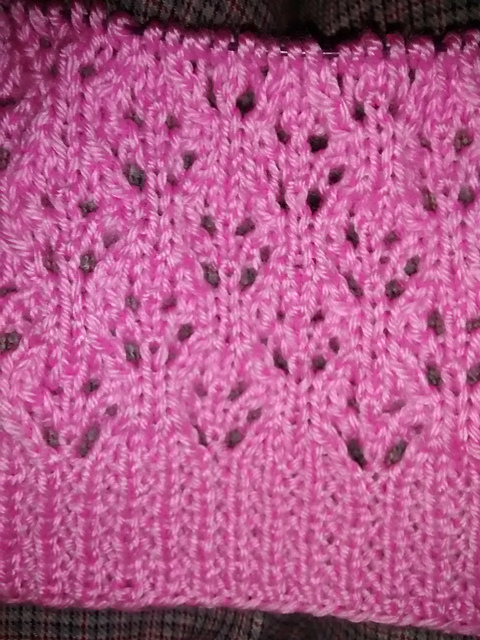 This one is not quite as quick of a knit.  I have a few repeats more to go before starting the sleeves.  Hopefully after the sleeves it will be a bit quicker and more fluid knit - I would really like to have a few sweaters to wear this autumn, but if I never cast off, it'll be rather unlikely.

Speaking of sweaters, I cast on yet another one... or two.
On the 14th I cast on Melia.  I love that the pattern is based on a faerytale, and the pattern is knit from the top down, no seaming required! I managed to finish half of the hood in a single sitting, though I have a few inches to go before starting the next section - everyone loves a good sized hood! 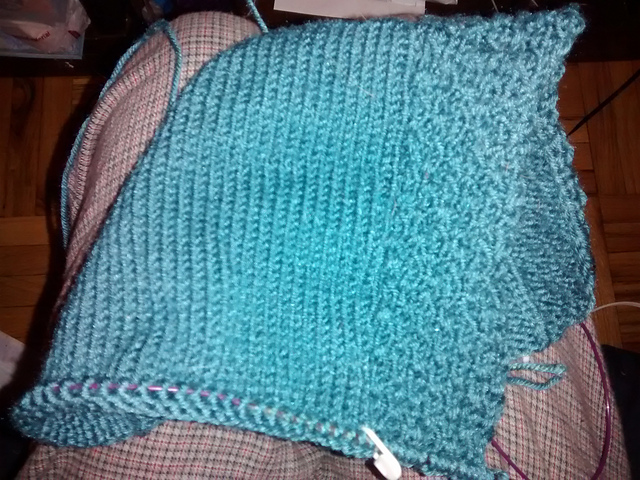 The second, was from the Spring/Summer Knitty edition - Icarus.  I love the pattern and had to cast on immediately.  On the 15th I cast on, and knit my way to the waist shaping. I'm going to work some more on this one tonight, I hope to have it finished within the next week! 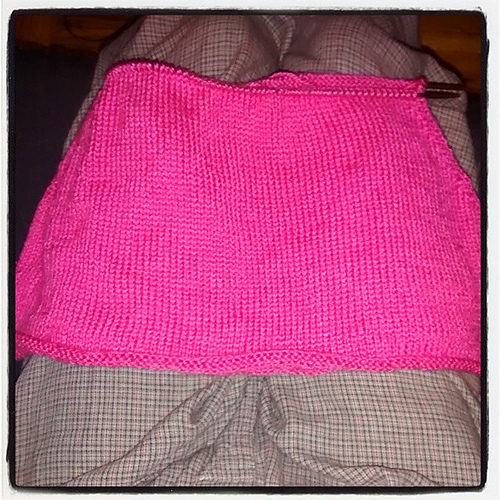 There were a few days I had not been knitting... though I did need to do something crafty, so I broke out the Rainbow Loom.  After looking at a few patterns I decided to make this little guy:

I thought it was too cute to pass up! If you want to make you're own, you can watch the tutorial here.
I also made a feather stitch bracelet:

I wasn't using regular bands for this one, so it looks a little wonky.  I'll have to get more bands soon!

And in spinning news, I managed to get an antique spinning wheel on kijiji! I haven't picked it up yet, but once I do, there will definitely be pictures!

Off to go knit some Icarus!
Posted by Faela Star at 7:44 PM