It's been a while!

Sure enough, after the last post, everything I had planned on doing was derailed.
January 6th I slipped on black ice and hurt my arm.  I didn't think much about it, continued on my way to work and finished my work day as usual.  Though my shoulder and arm was still rather sore, I then continued to help out at a catering event.  By the time N picked me up and was driving me out to our little hide-away, I was in agony.  I played it off as over-use and babied it that night.  I didn't go to the hospital for a full week after, thinking I'd just strained the muscle.  Once there, I was put through a fast paced series of tests, and was told I had a very small, and minor, tear in my rotator cuff; and tendonitis.  Surgery wouldn't be required if I didn't use it for six weeks... which stretched into 9.  I wasn't able to knit, bead or do anything I'd normally be able to do.  Sadly, though it's healed now, I still have issues with it.  I can't knit on small needles just yet, the tension makes my shoulder ache after just a few rows.  Hopefully, as I build the strength back up in my shoulder, I'll be back to knitting anything and everything shortly.

Now that you know why I've not been writing, I can update with some more interesting things!

N: The knight in shining armor, that for once didn't end up an idiot in tinfoil.
The night of January 6th, N said he'd make up for me hurting my shoulder.  I thought maybe some shoulder rubs, but he surprised me with something greater: The Harness Dress.

UNIF had a dress that I longed for, but couldn't justify spending $50 in shipping on ONE item.  I gawked at it on multiple sites that carried some UNIF garments, and planned on buying it at the end of the month.
Upon getting to our hide-away, N suggested I hang up my coat in the closet.  I opened the doors and there it was - The Harness Dress. 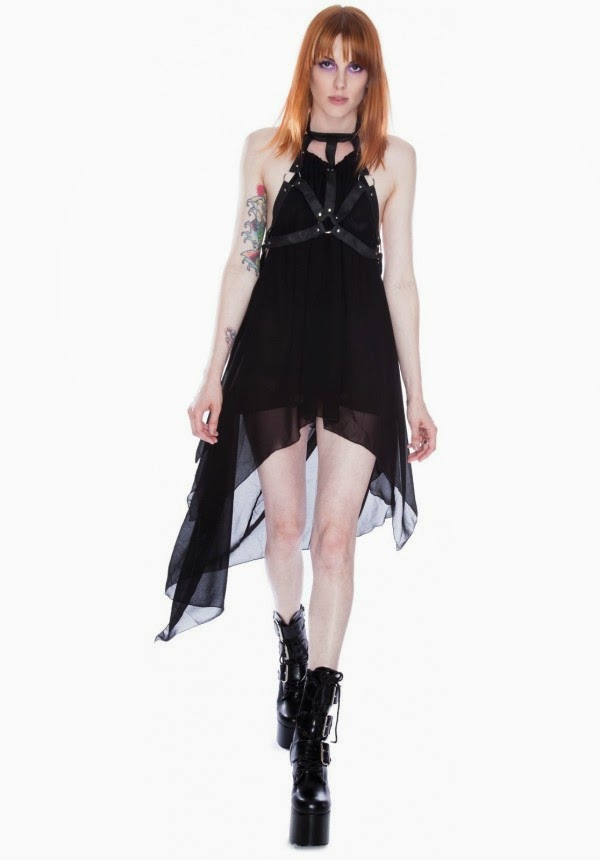 Of course, the moment I saw it, I let out an inaudible gasp, and stared for a second, before dropping my coat and grabbing the hanger.  I ran into the bathroom in two quick steps and had to try it on.  It fit perfectly, and looks rather lovely.  The low cut back and sides show off my tattoo, and the sheer fabric makes it light and breezy - perfect for hot summer days.  Now, N insisted it was a late Christmas present, but I know he was just excited for me to have it.

We spent as much time as our schedules would allow together - not something very easy, as only one of our days off actually lined up.


Fast forward to Valentine weekend, where we spent the weekend snuggled up eating Sushi, watching movies and just enjoying each other's company.  Being a Community fan, he made me some Perler sprites of the cast - Annie, Troy, Abed and Pierce. I dressed up like a vintage quasi pinup girl, quasi 50's gothic house wife, it was rather fun all around. 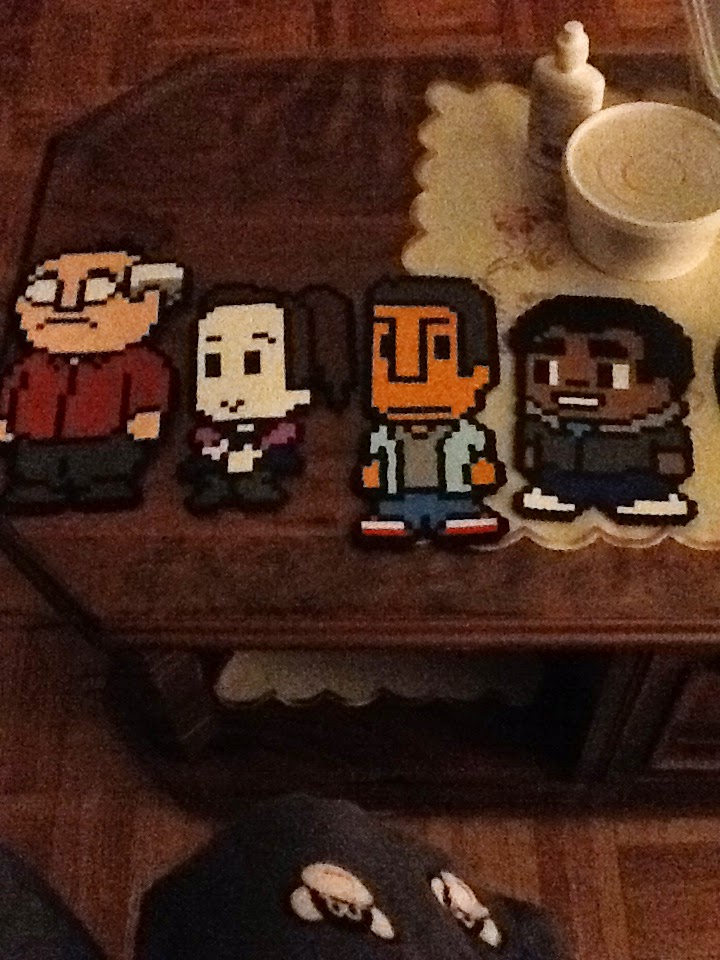 We'd started spending weekends here, he'd pick me up after work on Sunday, we'd have dinner together and he'd spend the night.


In March, I went to the Ripley's Aquarium with my best Ginger friend.  I loved the whole experience, and soon fell in love with the stingray. I even got to pet one! 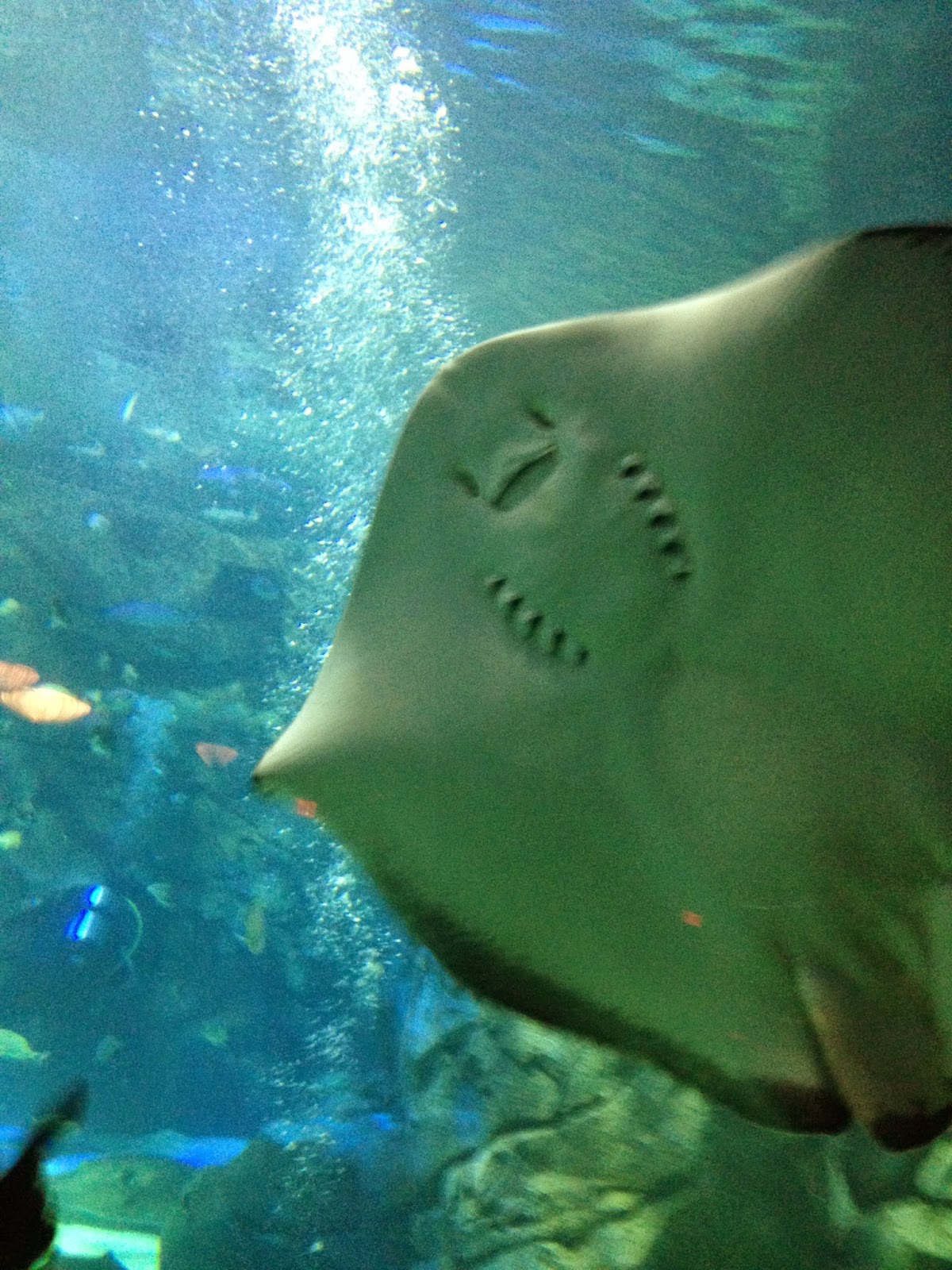 During the time I was unable to knit, I found I could use the Rainbow Loom with one hand.  I made a few bracelets and a charm, but nothing seemed to compare to my beloved knitting.  I haven't done anything since I've picked my knitting back up, but I'd like to try it again, when I'm not in pain.

During my no knit time, I managed to knit a few rows of the Afternoon Tea Shawl, and managed to finish it.
It was a rather fast knit, all things considered.  I only have a picture of it being blocked, when I'm able to get some nicer shots, I will post them as well. 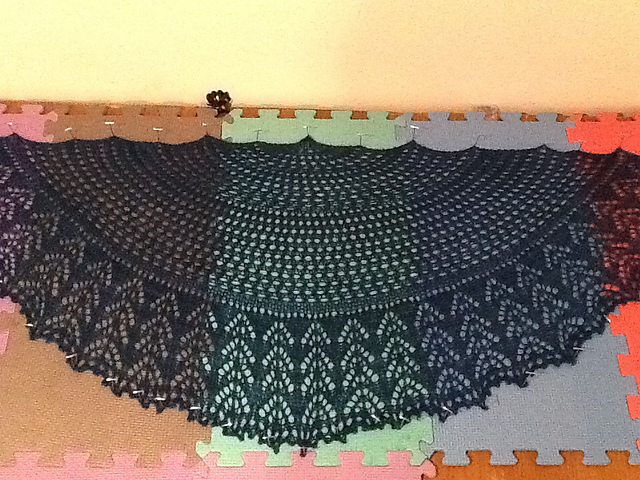 As mentioned in a previous post, I had my Aestas hat on the needles for a while.  I ended up frogging it and casting back on. It's a rather fast and easy to remember knit. 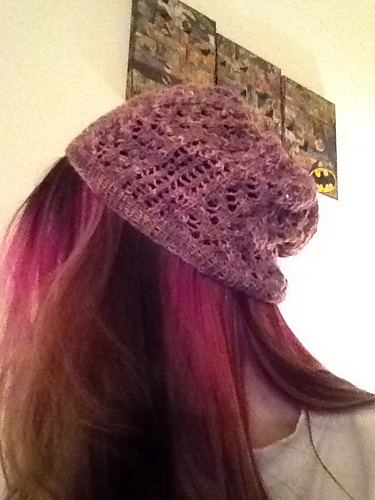 I'll have to get some better pictures of this one as well, which, - again - I will post later.

My birthday was in April. My Ginger bestie was out of town with his girlfriend, and I figured N was busy with school, so I planned to spend a quiet day to myself.  I was pleasantly surprised! Just before midnight, N pulled up and knocked on my window.  I was excited to see him, I hadn't seen him hide the gifts he had brought with him.  He came in with a large, rather heavy box.  Again, I was too busy being excited he was here to really grasp what could be in the box.  That wonderful man bought me a pink pellet gun.  I'm not someone who wants to shoot people or animals, just targets.  There's something calming about zeroing in on the bulls-eye.
A little collage to commemorate the event:

When Ginger came back from his trip, we had a nice dinner together and he gave me a lovely little gift: 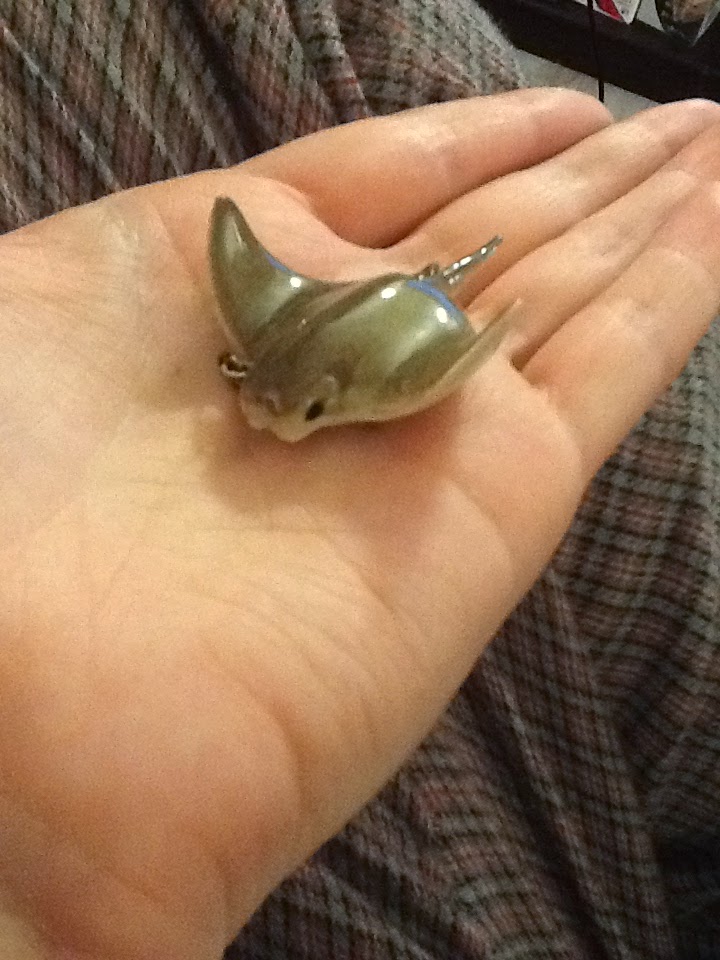 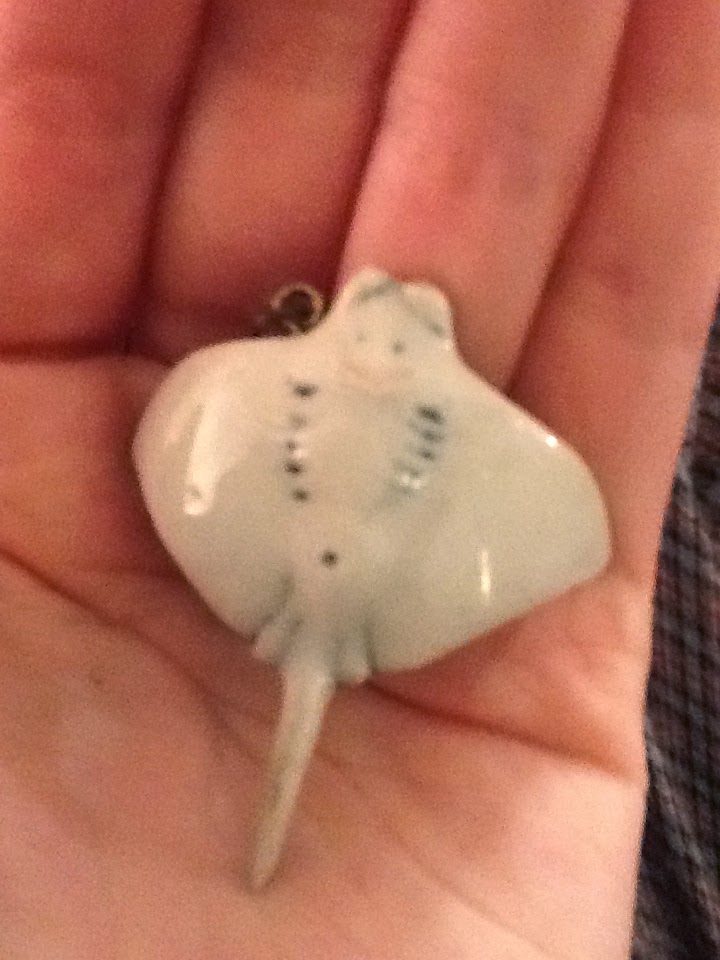 An adorable stingray pendant.  I've been wanting to go back to the aquarium since the first time I went, if only to sit in stingray bay and watch them, then to go up and pet them before I leave.  I think this is the perfect little dude to remind me of such a lovely experience.

For my birthday weekend, I wanted to do something wild.  N and I went to Techno Colour Dreams Paint Party at the Phoenix.  We both found white outfits to wear, something very unusual for both of us, and felt awkward making our way down.  The website said to arrive an hour early to ensure a good spot in line... However, once we were there we were the only ones in line, and felt rather out of place.  We decided to find a bar to have a few drinks prior to the party, and kill some time.  That's when we found The Irv Gastro Pub. It's a rather lovely and classy pub, and we're planning on a date night there this summer.  After two delicious Raspberry Express (N had beer), we made our way back to the Phoenix.  This time the line had started, and they were getting ready to let people in.  We made our way in, not really knowing what to expect. 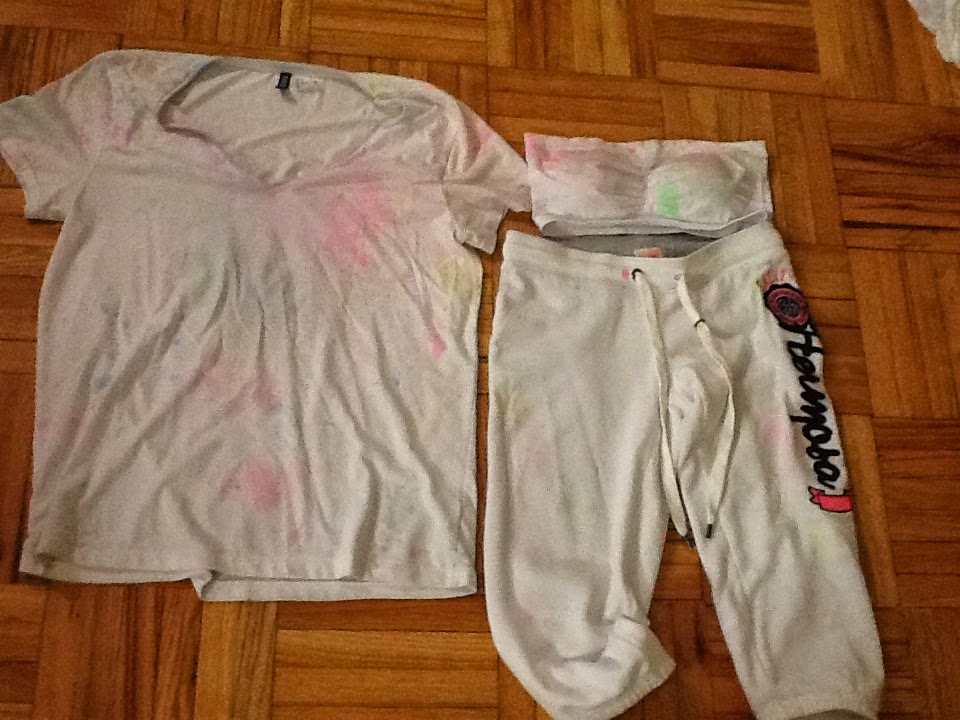 We may not have know what to expect, but man, did we have a blast.  Loud EDM and glow paint, and you have yourself a party. My face was covered on the way home, pink, green, yellow and blue glow paint splashed like an abstract painting.  We're looking forward to going again, whenever the next paint party may be.

For the month of April, I did the InfiniTam KnitAlong: 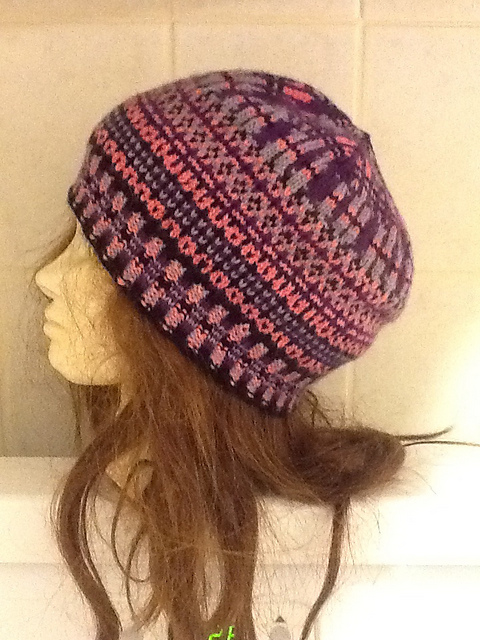 My clues were as follows: AADDB 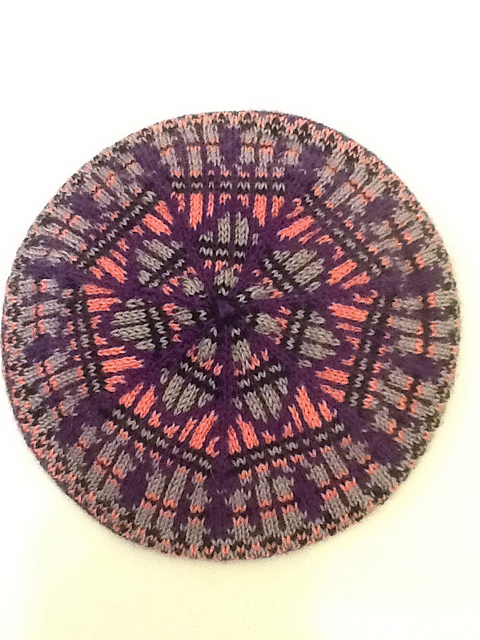 This was the first time I have done any colourwork using more than two colours in a single row.  It was a little more challenging than I anticipated, but it turned out really well.


May struck with tragedy; my beloved mouse, Pumpkin, passed away.  N was here to console me, as I was a mess.  I cried over the loss of my little friend, and N held me close. I hadn't expected him to be so loving, though my mouse meant a lot to me - I wasn't sure anyone else would see how devastating it was.

A few days later, when we were out doing errands, I looked at N and said I wanted to visit the pet store. We checked out the pocket pets, and we found a mouse that looks like my cat, Demon.  He's white with black spots, and a few dark brown spots.  N thought he was adorable, and we asked to see him.  He's a skitterish little guy, and did not like to be handled by the attendant.  He leapt to the floor, and surely was startled on impact.  I scooped him up, and held him against my chest, and he just snuggled in.  I looked at N and he was looking at me. He suggested we finish our errands, then come back for the little guy.  I mentioned the name Jinx, and while we were strolling around the grocery store, we came up with his name: Jinx P. Pie.  He assured me it was okay to get another mouse, and how Pumpkin would want the love and care and home to go to another mouse who would otherwise be left at the pet store.
After we had all of our errands finished, we made our way back to the pet store and picked up Jinx. 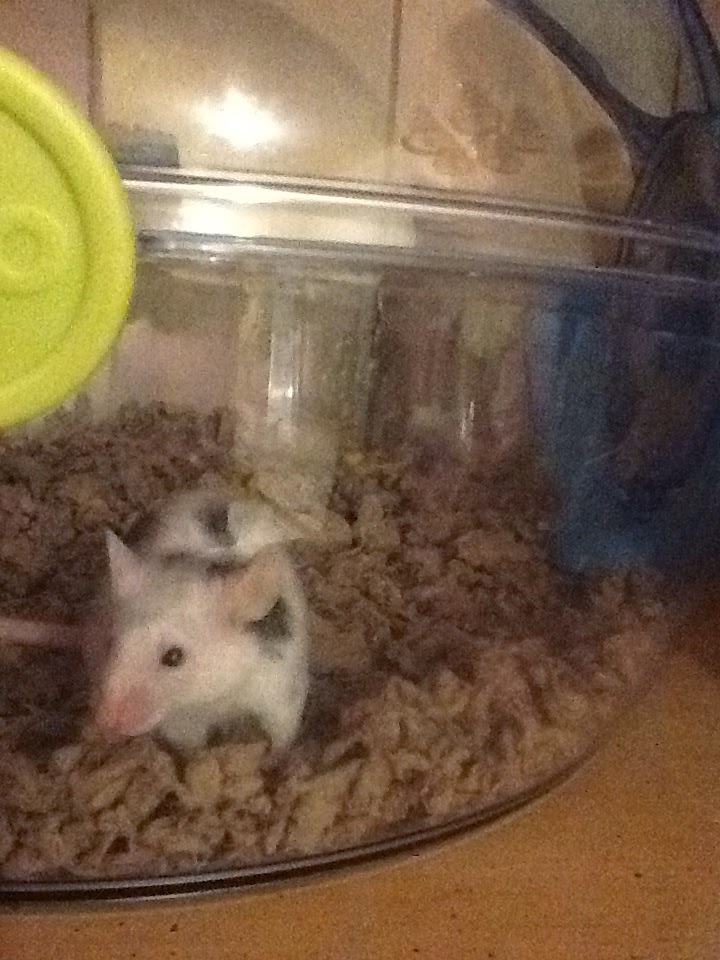 It's been just over a week since we've had him, and though he's still skitterish, he's coming around.  Though he's a nipper, he loves biting the bars of the cage and any wood sticks or chew toys we give him.  He has a bad habbit of nipping fingers that smell too close to food (which was initially how we were training him to come when we called).  It's going to take a while before he's well trained.

On the day Pumpkin passed, I received my Magic Yarn Ball Swap.
This was a "smaller" one, with only 9 gifts.  That being said, my wonderful swap partner admitted she doesn't follow rules well, and included a few gifts in each set.  She definitely put my to-the-rules-teeny-tiny swap box to shame.  I've already knit to the end of the skein, unveiling all the gifts.  I ran out of yarn for the pattern, but I only need to do the arm/neck/button bands, which I think I will do in black anyway.

1: Originally I had cast on a different pattern altogether 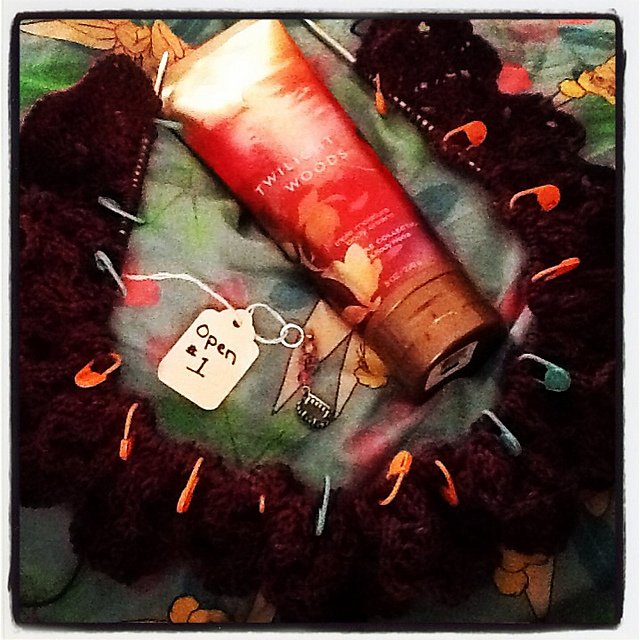 2: I switched over to the pattern I would continue throughout with: Sauble Sunset. 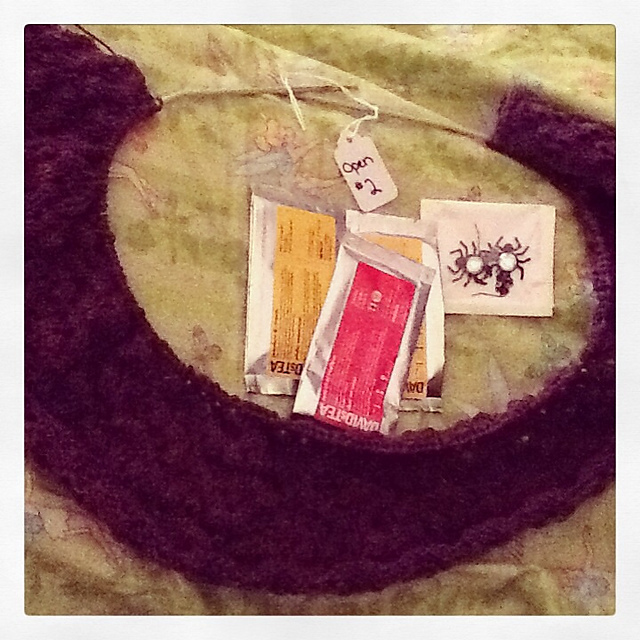 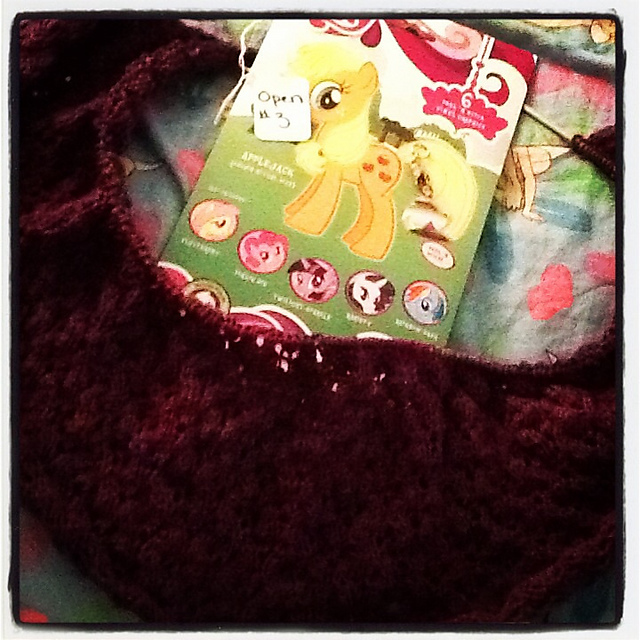 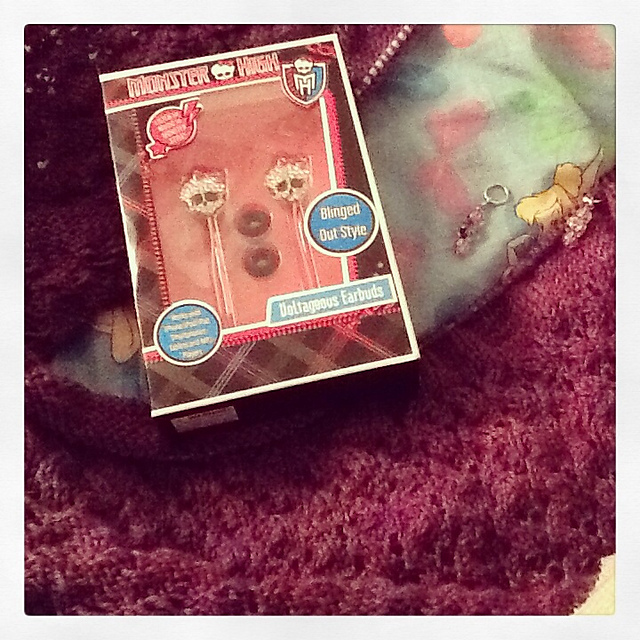 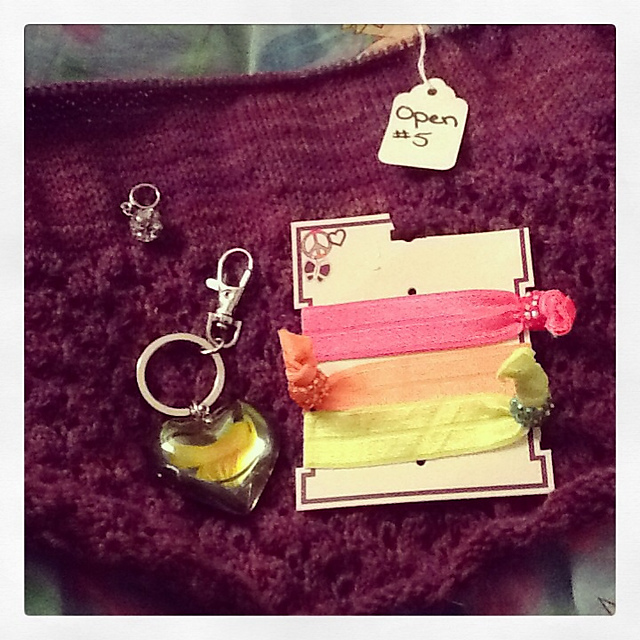 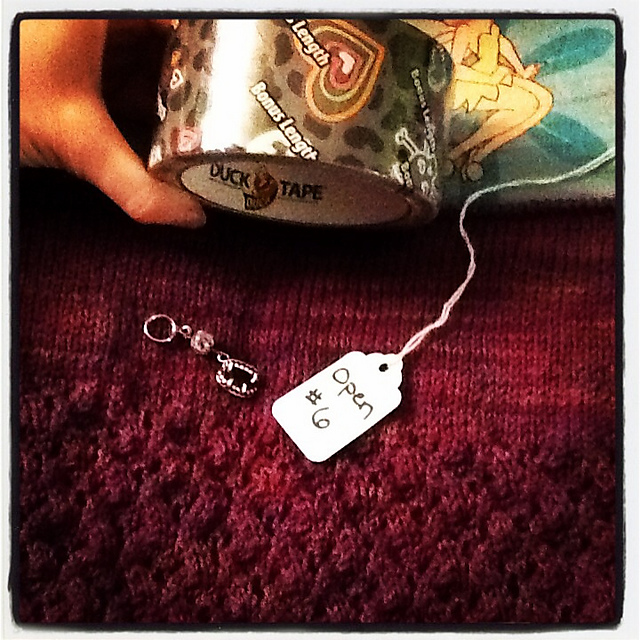 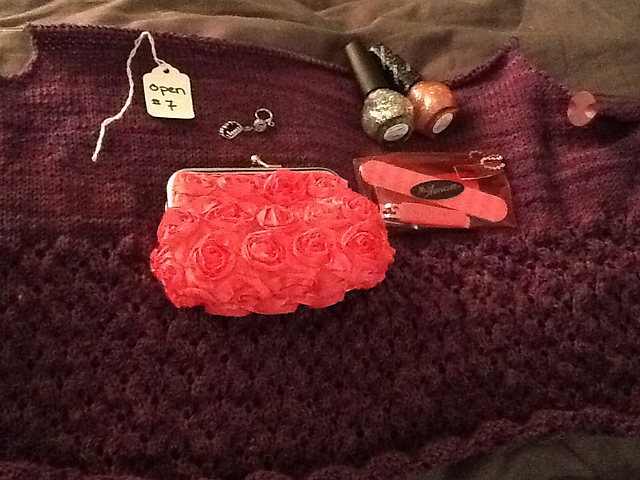 9: I'd reached my last gift as I cast off.  An adorable My Little Pony cup, and David's Tea Blue Lagoon and Strawberry Rhubarb Parfait. 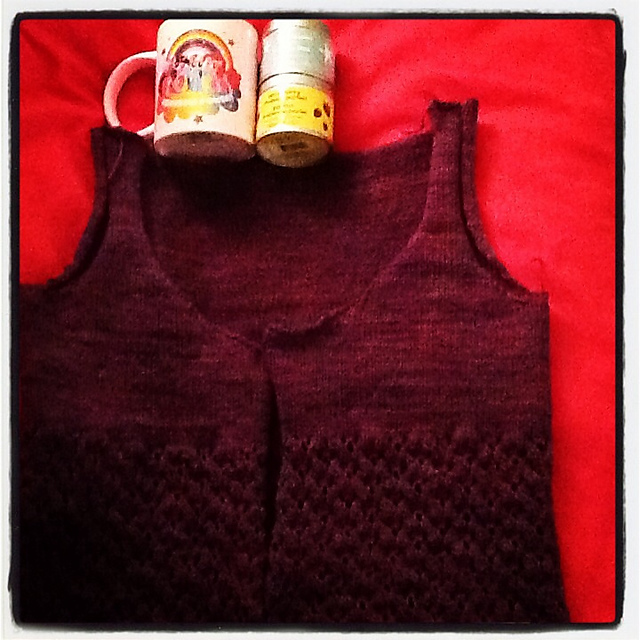 After blocking and seaming the shoulders this is what it looks like: 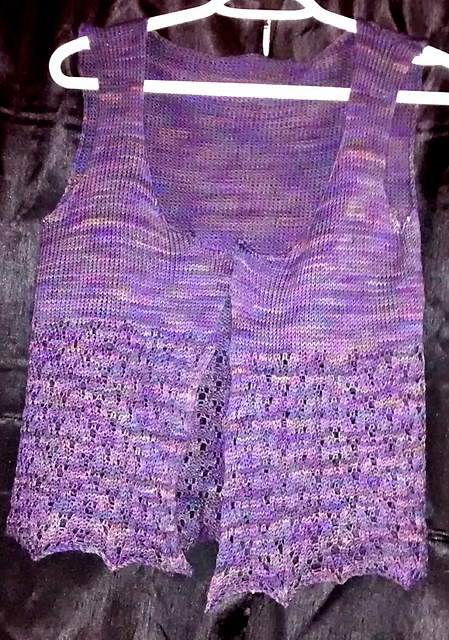 Again, I need to do the button bands and the arm/neck bands once I find a suitable yarn.

I did manage to do a very small beaded project at the end of April: 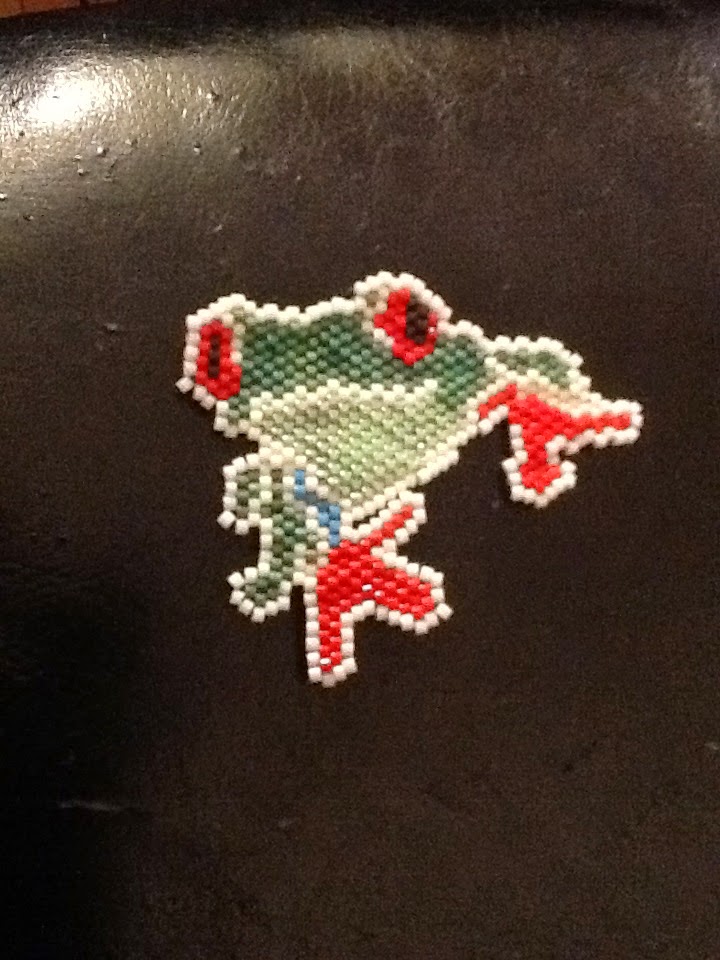 This little guy was shipped to Ginger's family, where he's now made a nice home.

I think this is enough of an update, I will attempt to post with more knitting soon.
Posted by Faela Star at 4:30 PM